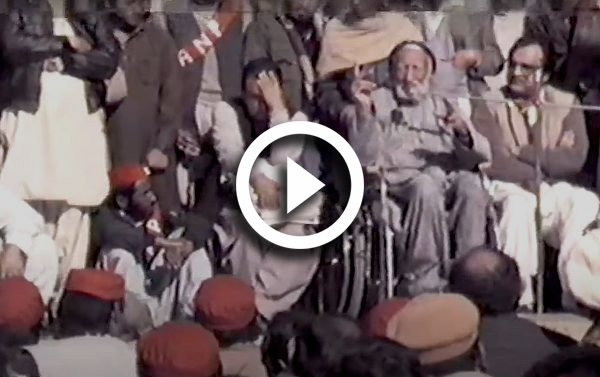 The Babrra massacre was a mass bloodshed on 12 August 1948 in the North-West Frontier Province (NWFP) of Pakistan, which took lives of 611 unarmed Pashtun martyrs who supported the Khudai Khidmatgar movement and at least 1200 people were wounded. The shooting happened on Babrra ground in Charsadda District under the orders of Abdul Qayyum Khan, the chief minister of the NWFP.

In September 1948, aforementioned Abdul Qayyum Khan Kashmiri, while giving his speech at the Provincial Assembly, said: "I imposed Section 144 at Babrra. When the people did not split, the shots were fired at them. Luckily for them, the police ran out of the ammunition, or else, not a single soul would have survived."

In July 1950, Hussein Shaheed Suhrawardy, the president of the Awami League and one-time Prime Minister of Pakistan, said at a large gathering in Dhaka, East Bengal (present-day Bangladesh): "The violent and inhumane massacre of the Red Shirts (Khudai Khidmatgars) of 1948 that took place at Charsadda surpassed the Jallianwala Bagh massacre of 1919 that was committed by the troops of the British Army in 1919 in Punjab.

On 23 April 1930, Bacha Khan was arrested amidst protests that came as the consequence of the Salt Satyagraha, in other words, the Salt March, an act of nonviolent civil resistance in colonial India led by Mohandas Karamchand Gandhi. A crowd of the Khudai Khidmatgar supporters gathered in Kissa Khwani Bazaar (Peshawar). The British colonial government ordered their soldiers to open fire on the defenseless followers of Bacha Khan. In that shooting 250 people were martyred. The Khudai Khidmatgar members acted in accordance with their training in non-violent manner under the leadership of Bacha Khan, facing bullets as the troops kept shooting them. Two brigades of The Garhwal Rifles regiment under Chandra Singh Garhwali refused to fire on the non-violent crowd. Later they appeared before the court-martial that convicted them with heavy punishment, including life sentence.

Following the Qissa Khwani massacre, the year of 1930 witnessed another mass shooting committed by the troops of the British Empire – the Takkar Massacre. This bloodshed was aimed against non-violent protests of Pashtuns.

The firing took place at Takkar in Mardan Tehsil on May, 30 in 1930 when local citizens attempted to prevent soldiers from arresting the active members of the Khudai Khidmatgar movement. In the subsequent shooting a British police officer called Murphy was killed. Three days later, a large force of troops assailed the village of Takkar in reprisal for the casualties.

The slaughter of Takkar was eternalized and folksongs were written to remember the tragedy. "Pa Takkar jang de golay warege," is still a popular and mournful folksong that portrays the village scene on the day of the British attack on Takkar. 70 people were martyred and 150 injured in the violence initiated by the British force. A monument was raised in order to honor the martyrs of The Takkar Massacre.

The Hatikhel massacre is a tragedy that occurred on 28th of August 1931 when approximately 80 civilians were murdered by the soldiers of the Frontier Constabulary and the British Indian Army in the district of Bannu of the North-West Frontier Province of British India.

Taken captive during the attack, the wounded Qazi Fazal Qadar died shortly after that. He was sentenced posthumously to 14 years imprisonment by the government, and having been denied any religious rites he was buried in Bannu prison.